"In almost all domains across Commerce - Management, Finance, Taxation, Audit; reading and understanding the financial statements is the most basic task. This is not possible without understanding and updating oneself about the basis of preparation, i.e. Ind AS. I am glad to launch a 35-hour quick, yet comprehensive understanding of Ind AS for Professionals across all domains in a classroom format to understand the core of all the standards in the simplest manner."

"Teaching Chartered Accountant aspirants for over 25 years, it gives me immense pleasure to see my students reach such heights. My interaction with my past students, regarding the challenges faced by them in the implementation of Ind - AS and my own experience in going through annual reports while tracking financial markets for decades, pushed me to design this course for professionals. I feel happy to teach my old students once again." 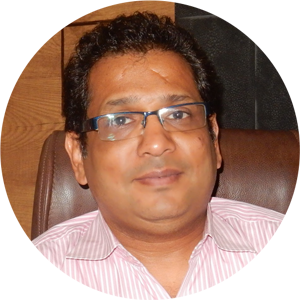 This course is designed to cover Ind - AS, as notified by the Ministry of Corporate Affairs (MCA). It has a detailed coverage of various Ind - AS (Indian Accounting Standards) including Ind - AS 115 - Revenue from contract with Customers, Ind - AS 116 - Leases, Ind - AS 109 - Financial Instruments (Including Hedge Accounting and Impairment under ECL framework) and other complex areas.

The program aims to provide the understanding on the evolution of Ind - AS through my teaching experience over last two decades, while focusing on practical challenges faced by professionals in the industry in application of them. The program covers discussion on recognition, measurement, presentation and disclosure requirements for different Ind AS and key differences between Ind - AS, AS and IFRS.

On completion of the Course, professionals should be able to:

Participants will receive a Certificate of completion at the end of the course and the assessment.

Ind As Simplified - Why Ind As - Background

Ind As Simplified - What are Ind As - Outline

Ind As Simplified - What are Ind As - Discussion

Ind As Simplified - Why Ind As - Background

Ind As Simplified - What are Ind As - Outline

Ind As Simplified - What are Ind As - Discussion

Corporates can also mail us at

CA Sudarshan Agrawal has been in the profession of coaching CA aspirants, ever since he became a qualified Chartered Accountant in the year 1995. He has been mentor to thousands of students in past two decades. He is credited with producing maximum number of rank holders, including AIR -1 (IPC & Final) from Eastern India.

He is known and accepted for his communication skills and student friendly approach in teaching. His two decades long experience and techniques ensure that all students, irrespective of their academic background, feel comfortable in the classroom. He is also known as one of the first few to use technology for imparting lessons to students in last one decade. In response to popular demand from students in cities other than Kolkata, he has been offering video classes to students across India for the past three years. The classes in Kolkata are recorded using latest available High definition technology and are sent to centers across India.

The classes are designed in such a way that all possible queries and doubts are taken up in the lectures. In case there are any such academic query of the student, there are various means of handling the same like whatsapp, dedicated query portal, direct interaction with sir etc. As part of the study Sir insists on practice at home. The detailed solution to all assignments for home is provided to the student upon completion of each topic.